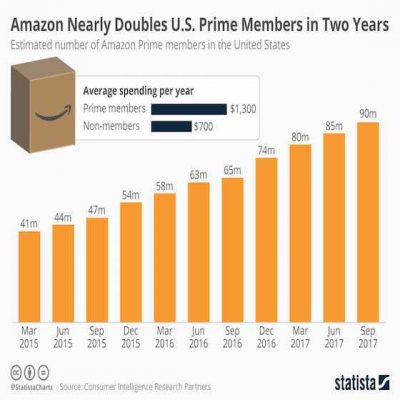 This chart shows the growth of Amazon Prime Members over the past 2 years on a quarter-by quarter basis and the estimated number of Amazon Prime members in the United States.

When Amazon introduced their Prime membership program in the United States in 2005, it gave members free two-day shipping as well as discounted one-day shipping rates for an annual fee of $79. A lot has changed since then. Amazon raised the membership fee to $99 in 2014 and added a ton of new perks for Prime members over the years. Those added benefits include free same-day delivery, unlimited video streaming, free access to a large music library, photo storage and, for the third time this year, an exclusive shopping event called “Prime Day” with tons of deals for members around the world.

Amazon’s ongoing effort to make Prime membership more attractive to customers appears to be paying off.

More importantly though, the Amazon’s Prime program looks to be very effective at achieving its main goal: creating loyal customers and getting them to spend a lot of money.

CIRP estimates that Prime members spend $1,300 a year on Amazon, compared to $700 for non-members. Multiply that $600 spending difference by the number of Prime members and you know why Amazon keeps adding benefits to the membership.

As our chart illustrates, Amazon’s profit (or what is left of it) is mainly driven by its highly profitable cloud business these days. Amazon Web Services (AWS), the market leader in the highly competitive market for cloud infrastructure, accounted for more than 300 percent of the company’s operating profit in the past quarter because the rest of Amazon’s business actually ran a deficit. The fact that AWS accounted for little more than 10 percent of the company’s revenue at the same time, illustrates how high the operating margin is in the cloud segment compared to Amazon notoriously low-margin e-commerce business.

For many years, Amazon has reinvested nearly every dollar it earns into its own growth. And even now that the cloud segment is making so much money, it seems like Jeff Bezos isn’t running out of ideas to reinvest most of it. 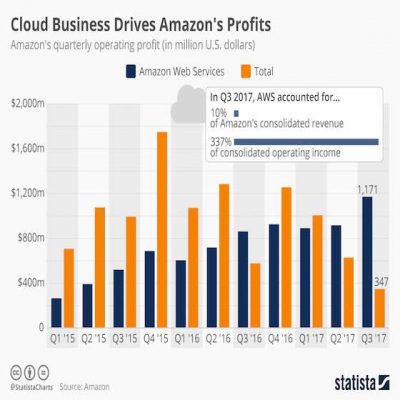